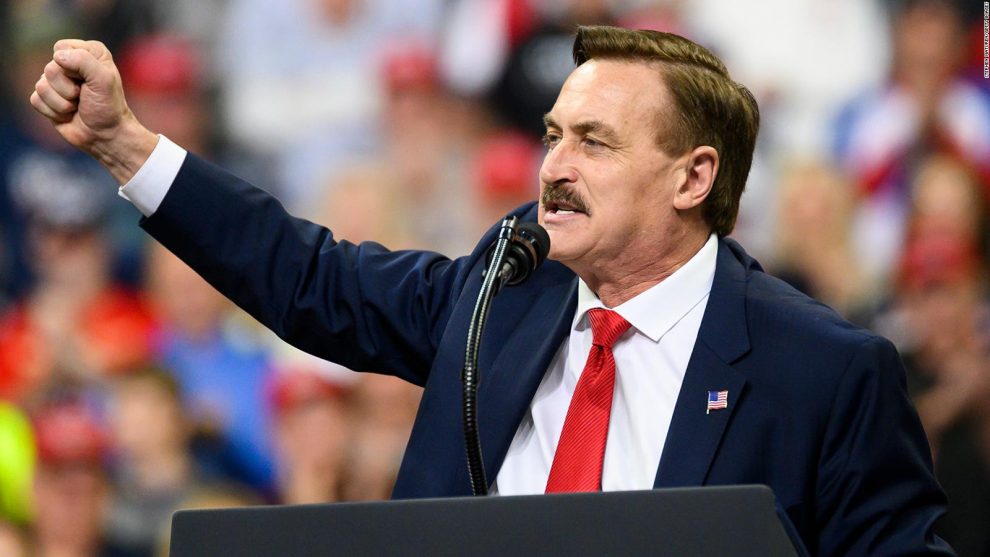 If you have been using pillow and bedding products from My Pillow, it is worth knowing who Mike Lindell is.

Michael James Lindell, who is popularly known as Mike Lindell is an American entrepreneur and the founder of the My Pillow Company. His venture is popular for manufacturing quality bedding, pillow, and slipper products.

Besides being a successful businessman, he is also popular for being the advisor of Donald Trump, the former US president. During the 2020 United States Presidential Election, Lindell showed his immense support for Trump by attempting to overturn the election results.

He is also the founder of a non-profit foundation called Lindell Foundation that is aimed at helping drug addicts. As of 2021, Mike Lindell’s net worth is estimated to be around $100 million. If you are eager to know more about him and his personal life, you should give this article a read.

Mike was born on 28 June 1961, in Mankato, Minnesota. However, he was raised in Carver and Chaska. As far as it is known Lindell had a very unstable educational life. He went to the University of Minnesota but dropped out after completing just a few semesters.

During his teenage years, he turned into a drug addict that had a huge impact on his growing years. After dropping out of college, he decided to get into business. Even though he never completed his studies, he was a very ambitious young man.

It was in 1980 when he first started his lunch wagons and carpet cleaning business. Not just that, but he also established a few restaurants and bars. All of his businesses were based in Carver County, Minnesota.

By 1990, Lindell turned into a full drug addict and was involved in gambling activities. He was addicted to alcoholic beverages and cocaine.

Lindell’s personal life has been bumpy since the beginning. He has been married twice, but both his marriages ended up in divorce.

His first marriage was with Karen Dickey. After getting a divorce from his first wife, he remarried Dallas Yocum in 2013. Sadly, his second marriage didn’t even last a full year. He has four kids from his marriages.

Many of you may not know this but Lindell is also into donations and charity. He has made generous donations to many organizations such as the Union Gospel Mission and the Salvation Army. He also founded his non-profit organization to help addicts.

For most of his 20s, Lindell was a cocaine addict. During this time, he also incurred a lot of gambling debts, which eventually made him lose his property due to payment failure. But he was lucky enough to break out from his addiction problems. He became sober through prayer in 2009.

Today, he is a successful businessman and the founder of My Pillow with an estimated net worth in the millions.

Mike Lindell’s life has not been easy. He had to go through a lot of ups and downs before becoming a prominent businessman. From being an addict to dealing with business clients, he has worked his way to the top. Today, he has over 1600 employees working for him and his company.

The My Pillow Company was founded by Lindell in 2004 in Minnesota. Right after its establishment, it emerged to be one of the biggest manufacturers of the pillow, slipper, and bedding products in Minnesota.

Even though the company was founded in 2004, its first sale didn’t take place before 2005. For the next six years, the company had a hard time selling its products at shopping malls and trade shows. But with Lindell’s consistent efforts, the company reached its peak after 2012.

Since the time of its inception, the company has been facing major challenges. One of the challenges came from the Better Business Bureau (BBB), an NGO that focuses on advancing marketplace trust. In 2017, BBB reduced the company’s rating to an ‘F’ based on Consumer Complaints.

Another challenge met by the company was in 2021, which resulted from Lindell’s close association with former US President, Donald Trump. This made him lose a good number of retailers.

His business faced a backlash due to his attempt to overturn the 2020 US election results. Not just that, but he was put in a bad light because of promoting Oleandrin, a toxic plant extract as Covid-19 cure.

However, top competitors like Bed, Bath and Beyond, and Kohl have argued that such a major drop in consumers is due to low demand and poor market research.

Despite all the troubles and challenges faced by Lindell, his net worth is in the millions. As of 2021, his estimated net worth is a whopping $100 million.

According to records, My Pillow Company has been able to sell over 30 million pillows over the years. This gave a major boost to Lindell’s net worth.

Mike Lindell is an ambitious man who knows how to work his way out. Despite all the challenges he has faced, he is standing tall and is successful in his business. His net worth is in the $100 million clubs, which shows how much he is focused on in his career.

Why did Lindell lose his house?

Lindell lost his property because he failed to clear his mortgage payment on time. This occurred due to his gambling debts and addiction problems.

How many times did Lindell marry?

Lindell has been married and divorced twice. His second marriage didn’t even last for a year.

How many kids does Mike Lindell have?

Mike has four kids from his marriages. He has two daughters, Lizzy Meyers and Heather Lueth, and two sons, Charlie Lindell and Darren Lindell.

Is Tom Selleck gay? Is it true? Let’s Find Out
Luke Sandoe: Net Worth 2021, Death, Body Builder and More
Comment