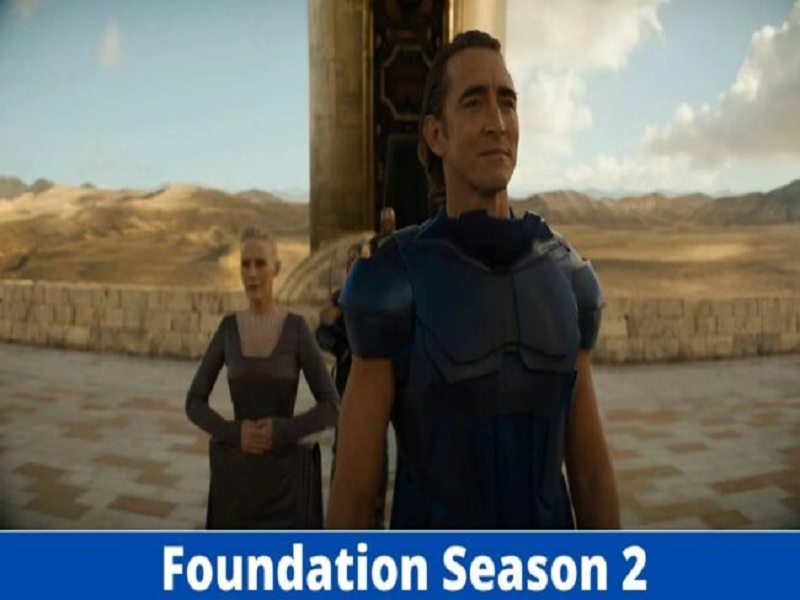 Everything You Need to Know About Season 2 of Foundation

Foundation season 2, Foundation is an epic Apple TV+ science fiction series set to premiere in September 2021 and is based, at least in part, on Isaac Asimov’s Foundation short story series.

In the year 12067 E.I., mathematician Hari Seldon makes a prognosis that the Galactic Empire will eventually fall apart. Accused of treason, he and prodigy Gaal Dornick are banished to the frontier world of Terminus, where they intend to construct the Foundation—a repository of human knowledge that Seldon hopes would cut the dark period of the Empire by 30,000 years, to only 1,000.

There were many unexpected turns and revelations at the end of the first season regarding the Genetic Dynasty led by Brother Dawn (Cassian Bilton), Brother Day (Lee Pace), and Brother Dusk (Terrence Mann), all of which beg to be explored in a follow-up season. Read on for details on the Season 2 premiere, returning cast members, and storylines for Foundation.

Schedule for Season 2 of Foundation

The release of Foundation Season 2 has not yet been announced. A new chapter in this epic saga is on the way, though.

The Czech Republic has since become the set of the sci-fi series, with filming beginning on April 11, 2022. Leah Harvey, who plays Salvor Hardin, said on Instagram that much of the movie was shot in Fuerteventura, one of the Canary Islands.

From what we can tell now, Season 2 of Foundation is being produced without any major delays. Seeing as how filming has commenced, we may see the epic science fiction series return to our screens as early as the first half of 2023. We’ll be sure to update you as soon as we have more information on the release date.

Characters in Season 2 of Foundation

As portrayed by Isabella Laughland, Brother Constant is a positive and confident claric sent to the Outer Reach to proclaim the word of the Church of the Galactic Spirit. Constant is an inspiration; she is a true believer, and you have to respect her for that.

Poly Verisof, also known as Kulvinder Ghir, is the Galactic Spirit Church’s High Claric. His wit and cynicism as sharp as a knife, yet he is a dreadful drunkard who is resigned to his fate.

Enjoiner Rue, Queen Sareth’s astute political adviser, is portrayed by Sandra Yi Sencindiver. Starting as a courtesan for King Cleon the 16th, Rue has worked her way up to become a trusted counsellor to the king.

Ella-Rae Smith plays Queen Sareth of Cloud Dominion. Sareth uses her cunning and charm to sneak into the Imperial Palace on a mission of revenge, taking advantage of the fact that she is almost always underappreciated.

Ben Daniels portrays Bel Roise, the final great general of the Superliminal Fleet and an enemy of the Foundation. Although he is a gentleman, Bel is beginning to lose faith in the Galactic Empire.

The Warlord of Kalgan, portrayed by monster man Mikael Persbrandt, is a powerful being who is driven by rage in his goal to rule the universe.

What to Expect in Season 2 of Foundation

Episode 10 of Season 1 of Foundation, titled “The Leap,” premiered on November 19, 2021, indicating the end of the first season despite the fact that the actual plot of the series is scheduled to be picked up at this same point. Production was directed by David S. Goyer, and the episode was written by him as well. From what we can gather from the official plot summary, “an unexpected friend helps Salvor create an alliance; a fight between the Brothers leads to unfathomable repercussions.”

In the season one conclusion, Hari told viewers that the Foundation’s real goal was to build a new civilization with the help of Anacreon and Thespis, which we’ve underlined. He posits that a “megaflare” created by the Invictus could be utilised to make it appear that Terminus has been destroyed. This would allow Outer Reach to expand undetected by the Empire. Mari bears Salvor to term for her parents, Gaal and Raych, on the Deliverance.

Some time later, Hugo has taken charge of the Invictus, and Salvor is running for mayor of Terminus. Salvor leaves Terminus to find Gaal as soon as she realises that the memories she has been having are those of her biological parents. After arriving at Synnax in 12,240 E.I., Gaal discovers another pod submerged in spaceship debris, where she awakens Salvor and learns that Gaal is her daughter. As Day discovers, the anti-Empire conspiracy tampered with Cleon I’s body a very long time ago, potentially impacting not only Day and all existing replacement clones but also Day’s ancestors.

A statement from Apple TV+’s Matt Cherniss, hinting at probable plot points for the next season, was also made public.

“I’ve fantasised about how Hari Seldon and Eto Demerzel would look and sound — what Terminus and Trantor would feel like,” said showrunner and executive producer David S. Goyer. Season 2 will feature more of Asimov’s iconic characters and places, such as Hober Mallow, General Bel Riose, and the Outer Suns. Knowing that Asimov’s masterpiece is finding a new readership fills me with joy. We’ve been thinking in the long term with ‘Foundation,’ and I’m so grateful to Apple and Skydance for giving me the chance to work on such a monumental project. Quick, everyone buckle up! We’re preparing to conduct some serious folding when space itself collapses.

Producer Robyn Asimov elaborated, saying, “David Goyer’s ‘Foundation’ has surpassed all my aspirations by bringing my father’s philosophy and concepts to the screen in ways my father could never do while being committed to his work.” My father anticipated the need for a cinematic adaptation of his work, but I have no doubt he would be overjoyed to see his epic story brought to life on screen by the show’s visual brilliance and deep characters.

My father cherished his listeners and was grateful for their loyalty; he also wished for his work to be remembered by future generations. The ‘Foundation’ TV show is helping him achieve this goal by introducing his work to a large number of viewers (and mine). Because of the weighty subject matter of the Foundation books, this is quite an accomplishment.