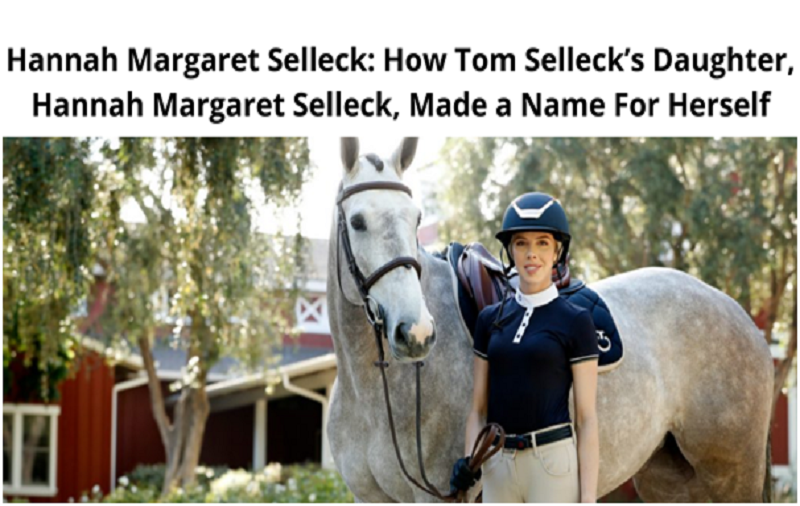 Hannah Margaret Selleck, a renowned name, in the field of equine riders. Everyone knew about Tom Selleck. He is a famous TV actor who starred in popular series like Magnum P.I, Blue Bloods, Three Men, and a Baby. Tom Selleck has gained a lot of fame that he could pass onto his generations but Hannah. Tom Selleck’s Daughter, Could not accept this and made her path to success.

Hannah’s Life at a Glance

From the very start, Hannah Margaret Selleck was clear about her passion and she followed it sincerely.

Years of hard work and dedication have made her reach the peak in qualifying for the Grand Prix level of competition and a stack of international medals, including top-five finishes in St. Moritz, Switzerland; Belgium; the Netherlands; and the Canadian Pacific Grand Prix at the 2015 Longines Masters of Los Angeles.

Hannah is not only a Horse rider but she has her breeding farm in collaboration with her Father. So, meanwhile, when Hannah is not competing, she trains horses on her farm.

Hannah Says “For me, it always works. It’s not like idle trail riding. We’re always working for a goal and we prepare for weeks for that one to two minutes in the arena. I’m always thinking about what we need to do to improve.”

What other say about Hannah Margaret Selleck?

Ariana Rockefeller, a fellow equestrian athlete, and businesswoman said that “On days of competition, she is calm and disciplined in how she trains, prepares mentally, and executes her performance on course,”. She met Selleck on the circuit six years ago. She added that “While the zeitgeist is telling society to be likable, I truly have high esteem for Hannah because she is independent,” adds friend Julia Loomis, a documentary filmmaker based in Manhattan. “Yes, she’s spontaneous, optimistic, determined, witty, and extremely bright—qualities that are the best influence. But most impressively, she understands self-worth.”

When one leg break is enough to set back and do some rest, Hannah this time too chooses a different path. When a horse refused to jump and quickly turned, Selleck’s foot got stuck in the magnetic stirrup, resulting in a shattered tibia and fibula. She had to undergo 6 hours of long surgery followed by physical therapies and hence Hannah was out of court for 7 months.

But she did not felt low and decided to go for Horse riding as soon as she got thumbs up from Doctors.

“I consider myself to be very lucky with injuries in this sport,” she notes, pointing out that she’s sustained many broken bones in her 25 years of riding, none of which previously required surgery. This most recent forced hiatus provided an unanticipated opportunity to refocus, she says. “For the first time, I feel like it’s given me more balance in life. I’ve tried to take away that feeling. As athletes, we always have goals and sometimes we forget to enjoy life.”

Nothing has Stopped Hannah from being an equinetarian and That’s why she has become so successful, despite choosing a different career for which her parents have built an Empire.

Hannah Margaret Selleck always says, “Horses will always be part of my life.”

Whatever name she got, she has made her own identity and that is why Hannah has made a name for herself.

Dear readers, this is all about determined Hannah Margaret Selleck. I hope you loved reading this article. Share your feedback. Thank you!